Usnea Lichen and its components:

This little known herb has some very interesting and powerful qualities. You can find it as an ingredient in our Immunaid Formula. This is because it is known for its anti-fungal, anti-bacterial, anti-fungal abilities. Usnea Lichen itself is actually not a single plant but rather a combination of algae and a fungus that have developed a symbiotic relationship in which both benefit in order to thrive in nature. The algae have the ability to produce food for the organism in the form of photosynthesis and the fungal structure supports the algae and protects it from drying out. Lichens contain over 700 compounds including Usnic acid, stictic acid, and vulpinic acid. These are produced by the lichens as a defense mechanism that serves to prevent the growth and spread of pathogens that could harm the lichen. In scientific studies, pure extracts of usnic acid, stictic acid, and vulpinic acid actually prohibited the growth of gram-positive bacterias. Staph infection and Strep are both examples of gram-positive bacterias. 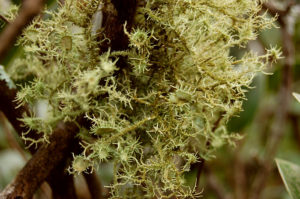 The potential danger of overuse of prescription antibiotics

Even a single round of antibiotics can permanently alter the natural flora balance in the gut and it may never fully recover. Add to that the total rampant abuse and overuse of antibiotics in western medicine that are creating antibiotic-resistant super bacterias that cannot be killed. Long term effects can also lead to conditions such as IBS, Crohns Disease, Ulcerative Colitis, as well as many auto-immune diseases. All of these conditions are contributed to unhealthy balances of bacteria in the gut and one of the causes is being potentially linked to the overuse of antibiotics.

How Usnea Lichen is different than prescription antibiotics

Usnea Lichen is an herb known as an antimicrobial. Antimicrobial medicines are grouped according to the microorganisms that they act against. They have the ability to kill the microorganisms as well as inhibit their growth. Since Usnea Lichen is an antimicrobial, it does an excellent job at that and is known to specifically target gram-positive bacterias (such as staph and strep) while it leaves healthy gut bacteria essentially untouched. It has also been known to be effective for lung and upper respiratory infections and urinary tract infections.

Usnea Lichen as an anti-fungal

Anti-fungal qualities of Usnea Lichen have been shown to have a positive effect on the elimination of a wide variety of candida (yeast) species as well as ringworm, jock itch, athletes foot, and dandruff when taken orally and topically.

Usnea Lichen as an anti-viral

Studies have shown Usnea is effective in ridding the body of viral infections that are held in the mucous membranes including the Herpes Simplex Virus and the Epstein-Barr virus as well as lung infections such as pneumonia.